Five years ago Wesley Medical Center asked Wichita families to share their Wesley baby pictures to be featured on digital billboards across the city.  The program, developed by RSM Marketing Services for Wesley, was an instant hit and it wasn’t long before hundreds of baby images had been received, including babies born at Wesley decades ago.

“We knew baby photo’s were popular on social media and Wichita is one of the most populated markets for LED billboards in the world, so it just seemed natural to connect social media and LED billboards.” Said RSM Managing Partner Bruce Rowley.  “The reaction was immediate, within a year Wesley Birth Care had become the nation's most popular Birth Care Center on Facebook with thousands of ‘Likes’ and growing fast. 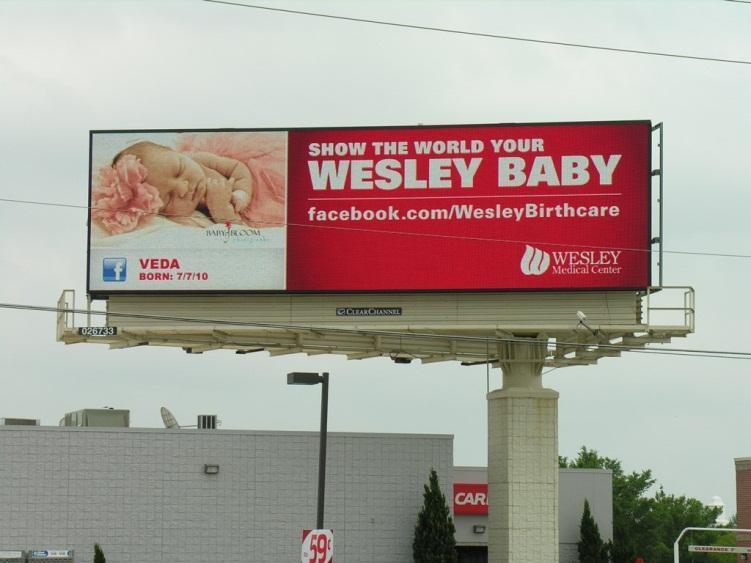 Wesley Medical Center has long been known as the Baby Hospital, a well deserved name since more babies are delivered at Wesley than any other hospital in a 13 state region.  With so many baby photo’s out there, it’s no surprise that the baby photo’s keep coming, even after the campaign reaches its five year mark. One baby was even featured on the TV news in Greece when a local family featured their baby boy wearing a Greek soccer team jersey and photographed his Greek grandfather proudly standing alongside the billboard.

You can ‘Show The World Your Wesley Baby’ by visiting the Facebook page for Wesley Birth Care and using the Baby Billboard app to upload your baby photo, name and birthday.